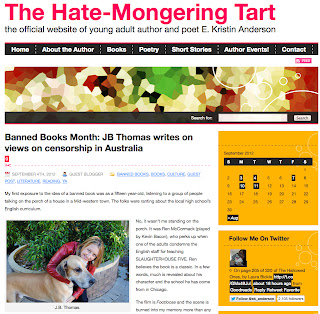 To celebrate Mammon's November paperback release in the US, I was invited to contribute a post on banned books to the website of E. Kristin Anderson, author and poet who runs The Hate-Mongering Tart. Every year, Anderson joins in the celebrations for Banned Books Week. It was awesome to write about such a rebellious topic!

Author of Fantasy Fiction for Children and Young Adults

J.B. Thomas is the author of Mammon, the first book in the Ferryman Chronicles series. Born in Perth, Western Australia, she was adopted at four weeks of age, and grew up in a beachside suburb with three brothers. After graduating from university, she worked as a writer in government, educational and charity organisations. She was inspired to write The Ferryman Chronicles by speculating what life would be like if human beings could become demons.

J.B. likes to mentor young writers and has published literary anthologies for high school students over the past three years. She is also the author of How the Crow’s Feathers Turned Black, which is one of Random House Australia’s Stories for Seven Year Olds. She visited the United States as a teenager and was particularly struck by the beauty of Arizona and the desert – memories that inspired a major setting in the second book of the Ferryman Chronicles, Rise of the Shadow Wolf.

J.B. is also the author of How the Crow's Feathers Turned Black, one of Random House Australia's Stories for Seven Year Olds.

J.B. enjoys urban fantasy novels such as The Mortal Instruments, along with television shows such as Supernatural, Grimm, and Doctor Who. She is a long-time fan of Great Danes, and when she’s not writing or reading, she watches films, walks her dog, George, and on occasion can be found playing online games. Mammon is her first novel.

Where to buy Mammon